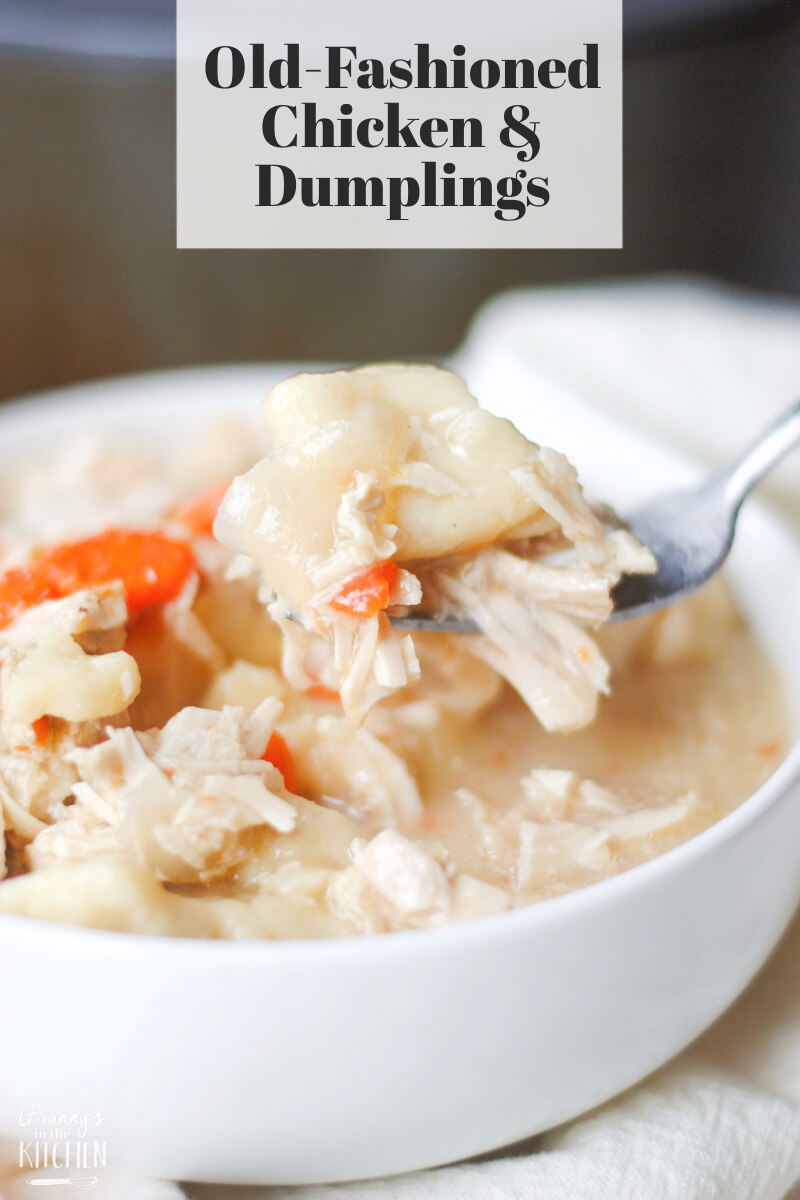 This dish is made from such simple ingredients, but it packs so much flavor!

The main difference between the two versions is the texture. Dropped dumplings become puffy while cooking, but they are more prone to falling apart or dissolving. Rolled dumplings are denser and have a texture almost like pasta. This is what I think of when I picture old fashioned chicken & dumplings.

Even though this recipe is made from scratch, it’s fairly easy to make.

While the broth is heating up, you make the homemade dumplings (they are so easy!) and drop them in the broth. They only need to cook for about 20 minutes and then you have a classic homemade chicken and dumplings. 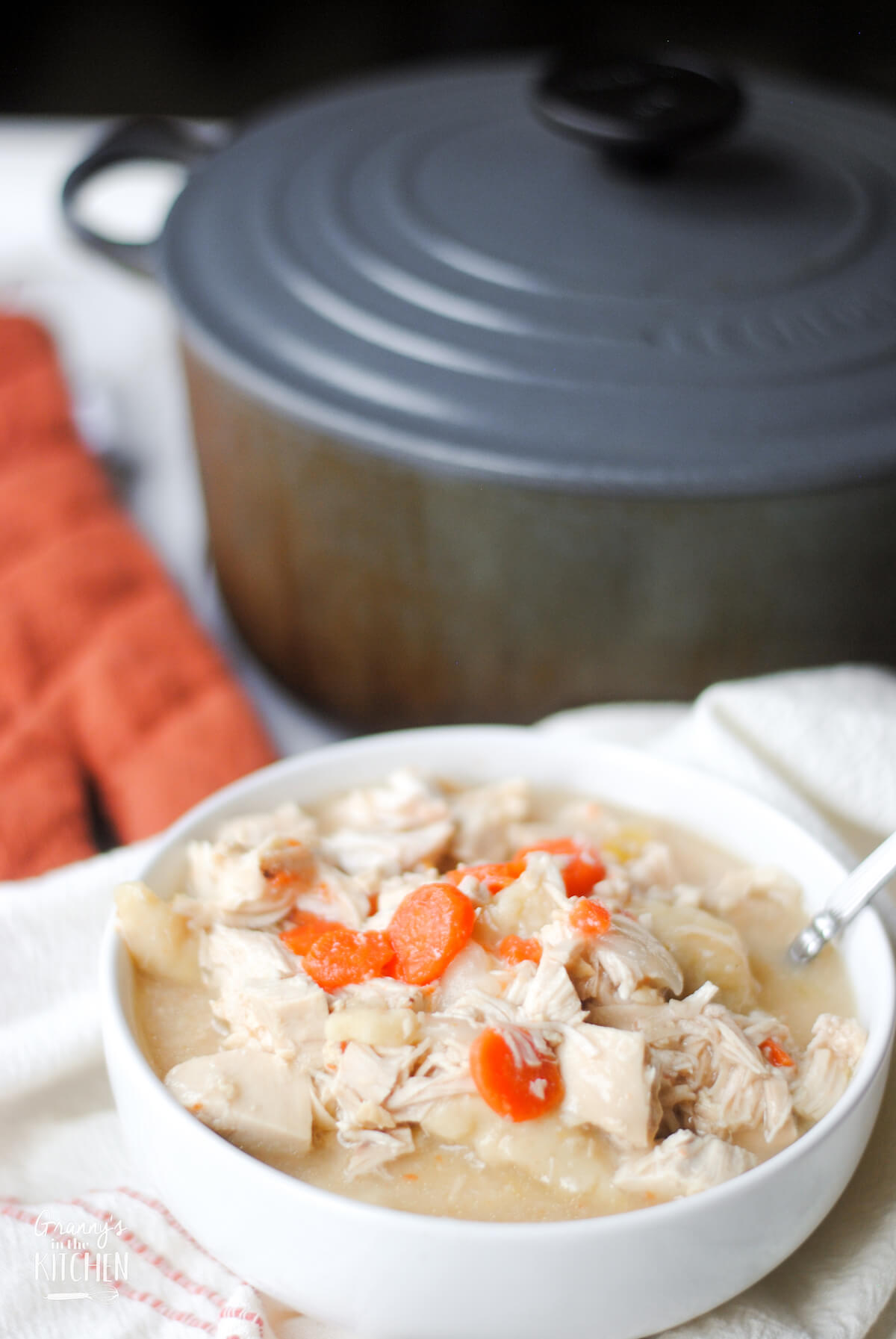 Where Did Chicken and Dumplings Originate?

Chicken and dumplings is commonly thought of as a Southern food. But interestingly, the dish as we know it today likely originated in Quebec, Canada during the Great Depression.

I actually did not know this until doing a little research for this post. However, it makes complete sense because my Great-Grandmother (Mémère) was from Montreal, Quebec. Very cool! — Stacey 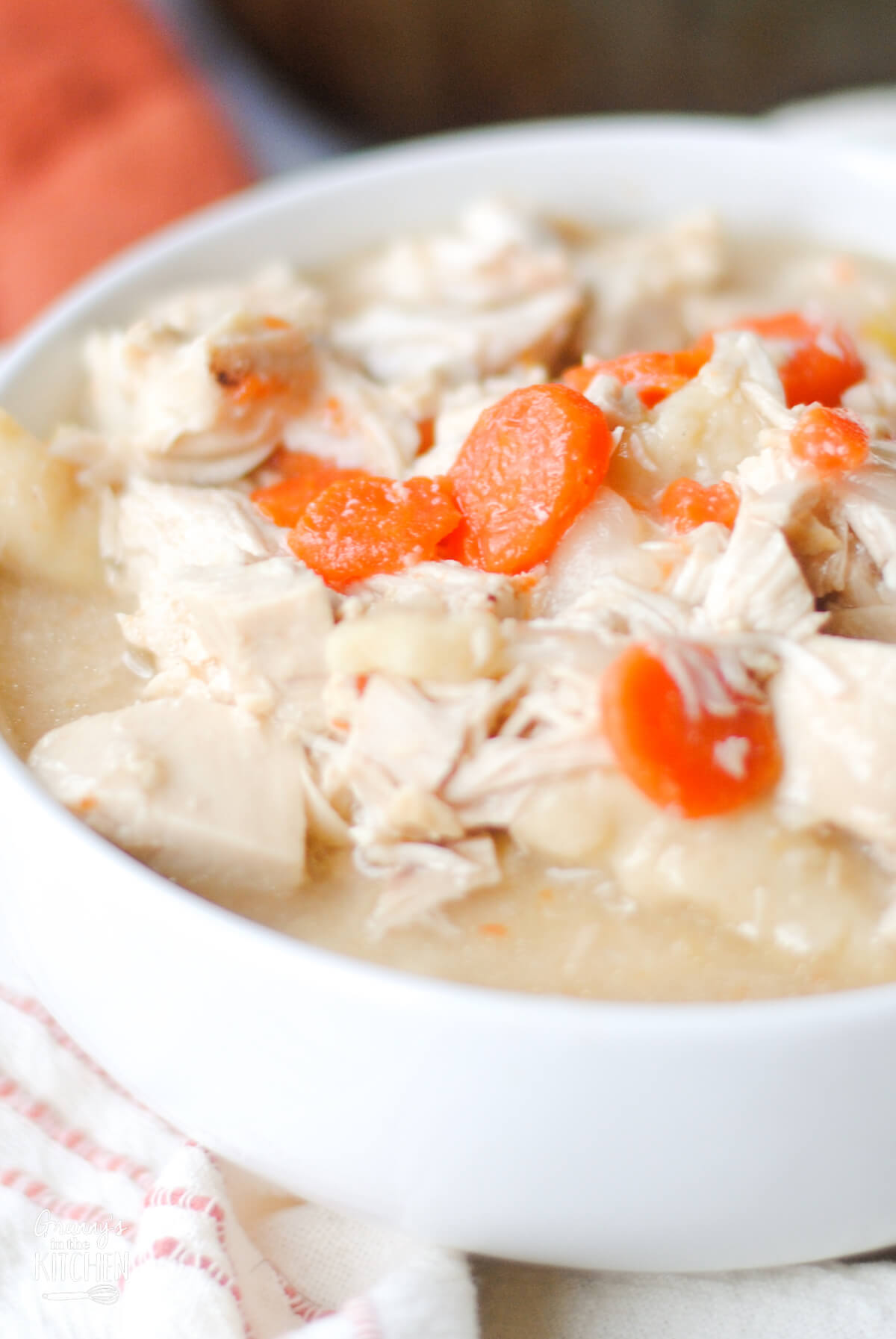 For your convenience in re-creating this recipe at home, we’ve included shop-able ad links to some of the products and supplies used. Read our disclosure policy here.

For the Soup Base

Instructions for Chicken and Dumplings

To make this dish, we first prepare our soup base using chicken broth and vegetables. While the broth heats, we prepare the dumpling dough. Then we put it all together.

How to Prepare the Soup Base and Vegetables 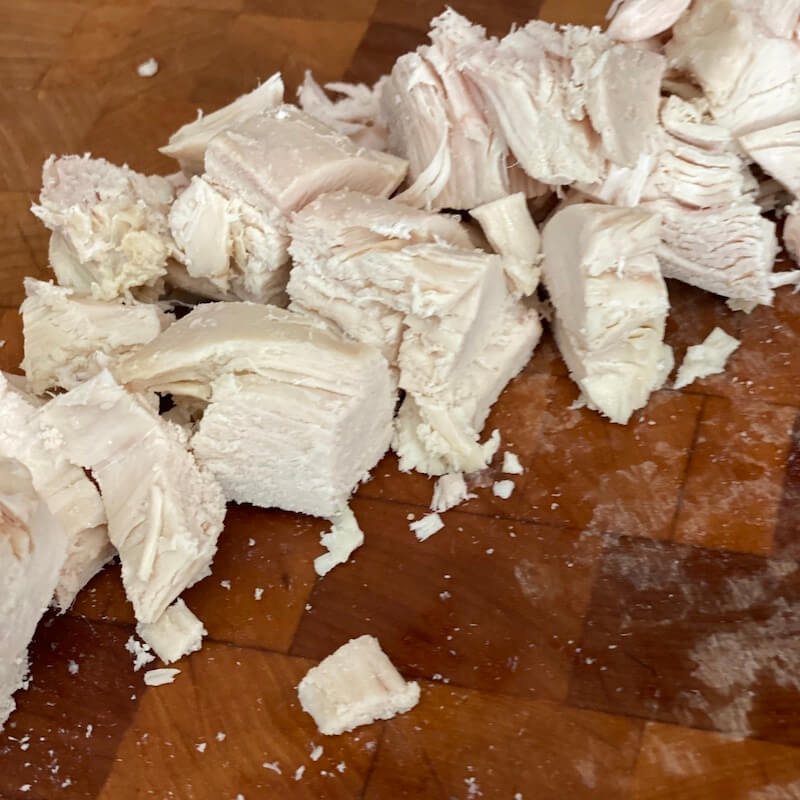 How to Make Rolled Dumplings 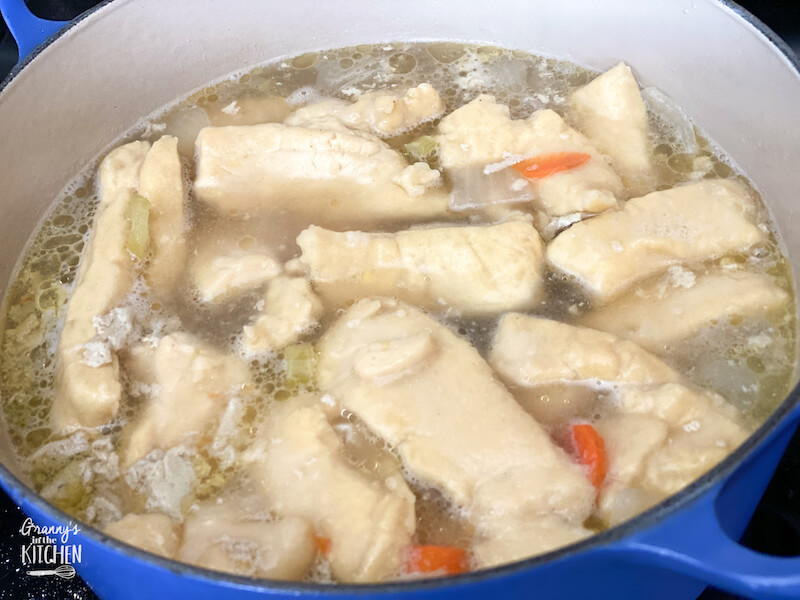 To serve: scoop into large soup bowls, making sure to get some of everything: chicken, dumplings, vegetables, and broth. Season with salt and pepper, if desired.

How Do You Know When Dumplings Are Done Cooking?

An easy way to test for doneness is the “toothpick test,” like you’d do for a cake. Simply stick a toothpick through the middle of one of the dumplings — if it comes out clean, they’re ready. However, 20 minutes is a pretty reliable cook time.

Can You Use Rotisserie Chicken?

For this soup, I started with a base of store-bought broth that I gave a homemade taste by cooking the vegetables and chicken in it. The cooked chicken is removed, cooled, and chopped up before adding back to the chicken broth.

To save time, you could simply cook the vegetables in broth and add pre-cooked rotisserie chicken at the end. Substituting rotisserie chicken will save about an hour of cook time, shortening the total time for this recipe from about 1 hour 40 minutes to just 40 minutes.

Why Are My Dumplings Tough?

If your dumplings are on the dense side, you may not have done anything wrong at all!

Rolled dumplings are supposed to be denser and a bit chewier than dropped dumplings, so keep that in mind.

One of the benefits to this denser texture is that the dumplings hold up better in the broth. They are less likely to dissolve and fall apart than dropped dumplings.

However, I would recommend taking care not to over-work the dough when you’re rolling it. Kneading dough more than necessary can toughen it a bit. 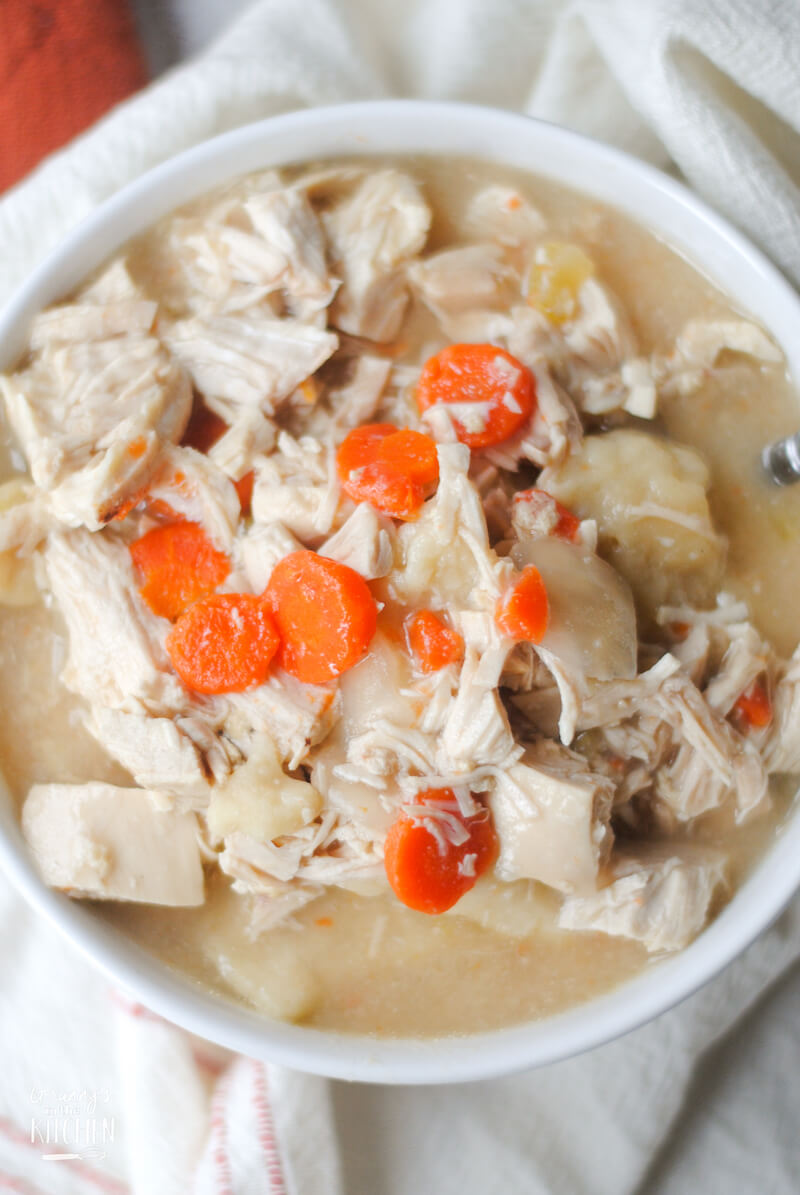 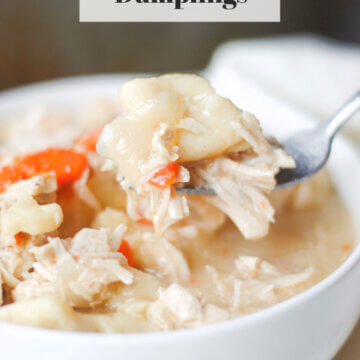 How to Make the Chicken Broth

How to Make the Dumplings

Nutrition information is an estimate only. Your actual values will vary based on exact ingredients used and serving size. 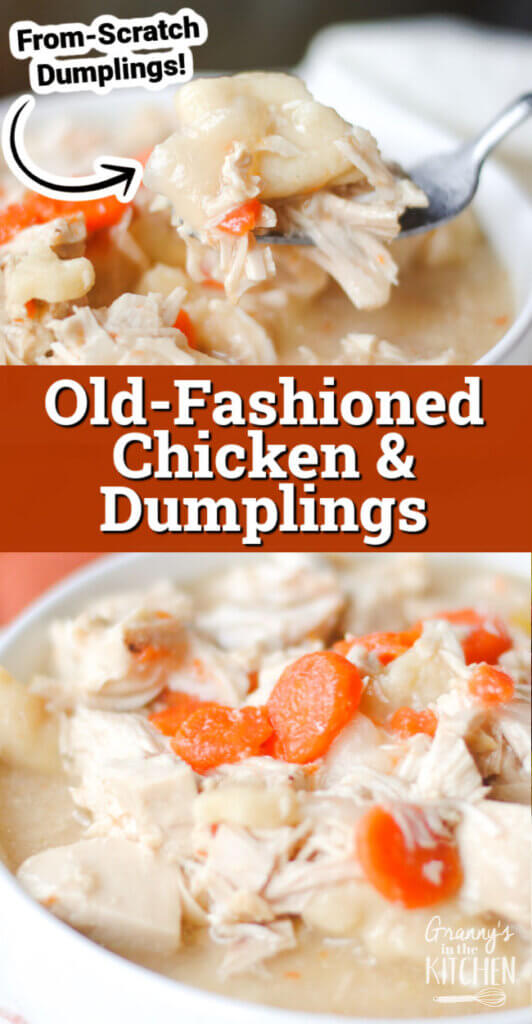 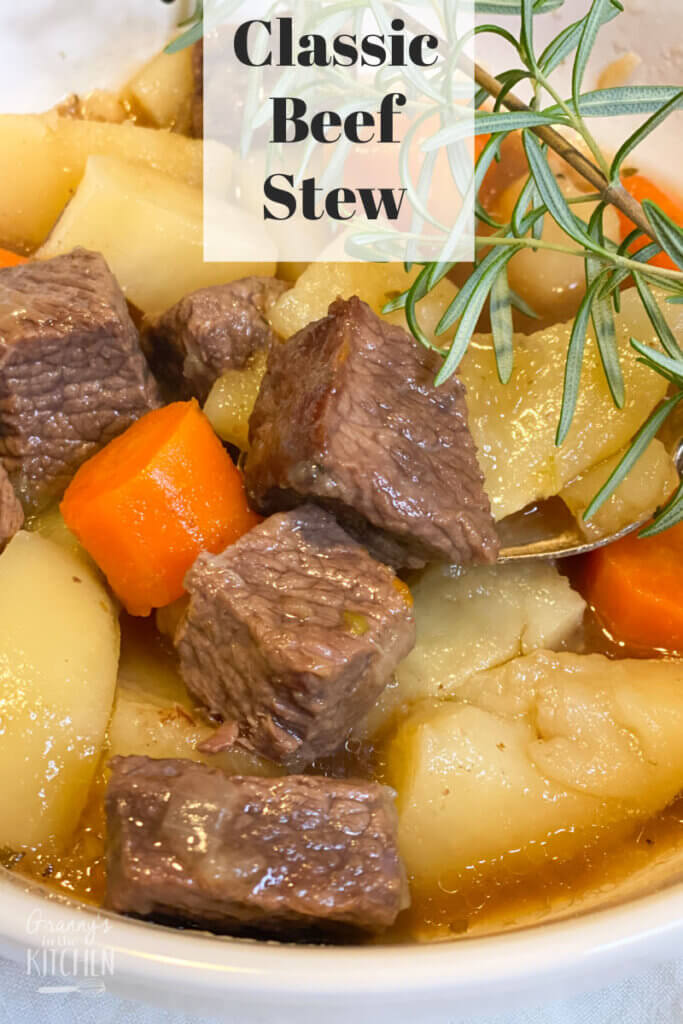 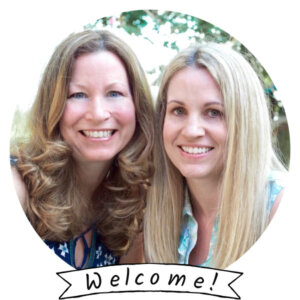