Watergate Salad is a creamy and fluffy concoction that has been a staple on holiday tables for generations. Not only is the recipe uniquely delicious, but the mystery behind it is fascinating too!

Light, fluffy, and fruity — Watergate Salad is one of the most well-known vintage recipes. With a base of pistachio pudding mix and whipped topping, this pistachio fluff salad features a mix of pineapple, pecans and marshmallows.

Is it a salad? A dessert? A side dish?

All three! Whatever you want it to be!

This is a classic recipe that has been on holiday and brunch tables alike for generations. My Granny and my mother in law both make their own versions of this dish and it’s one of my favorites! I’ve even seen this served at brunch buffets!

This pistachio salad recipe is bright green in color, which is what makes this fruit salad instantly recognizable. If you’ve never tried it, it can sound a little different, but it is SO delicious! The blend of sweet, creamy, fluffy, and crunch just works. One taste and you’ll get it!

The other great part about this pistachio fluff is that it is SO easy to make! You can whip up a batch in about 5 minutes, using simple thrifty ingredients! 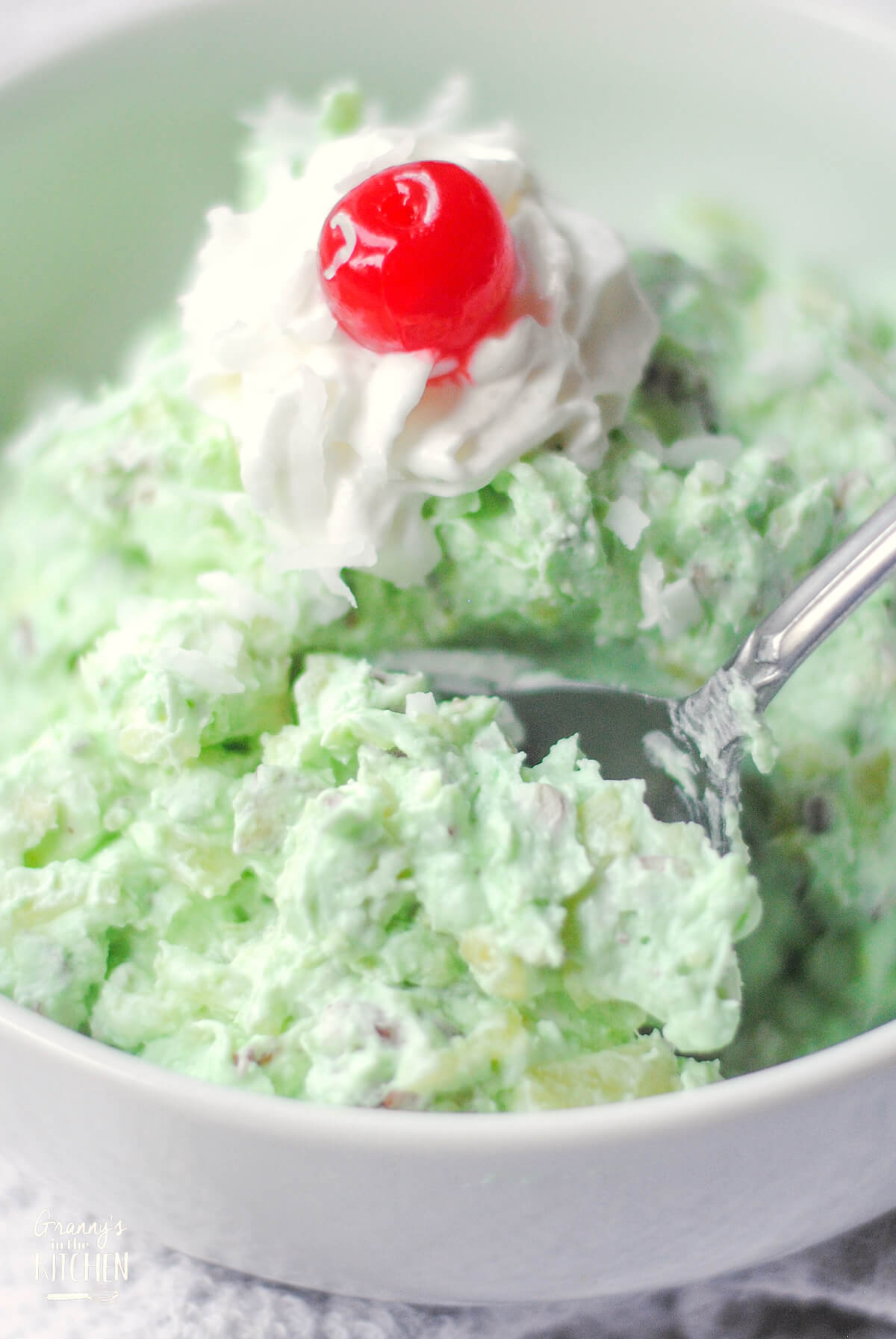 Why is it Called Watergate Salad?

This fluffy green concoction is known by many names: Pistachio Delight, Green Fluff, and even Green Goop. However, it is most commonly known by the name Watergate Salad.

There is a bit of legend behind the origin of the name “Watergate Salad.” It was first published in the early 1970s, around the time of the Watergate scandal and Nixon’s resignation. In 1976, the Denver Post printed a recipe for a dish that they dubbed Watergate Salad, purporting that it was invented by a chef at the Watergate Hotel. However, this story has never been confirmed and could very likely be a rumor.

Other rumors claim that the salad was served during the 1972 break-in at the Watergate Hotel, though that seems logistically unlikely. There is also a Watergate Cake with similar ingredients, which may have inspired the name.

The more likely origin of the dish is simply that it evolved out of the variety of dessert salads and fluffs that were popular in the mid-century, like Dreamsicle Fluff Salad. Ingredients like instant pudding and whipped topping were combined with a range of fruits, nuts, marshmallows, and other mix-ins. Ambrosia salad could be considered a cousin of Watergate salad, however the pistachio pudding and distinct green color make Watergate Salad its own thing.

In fact, General Foods (now Kraft Heinz) developed a recipe in 1975 called “Pistachio Pineapple Delight” to promote two of their products: pistachio pudding mix and Cool Whip. But company reps say they have no insight as to what prompted a name change.

No matter how the name came about, Watergate Salad has earned its place in American culinary history and on the dinner table! 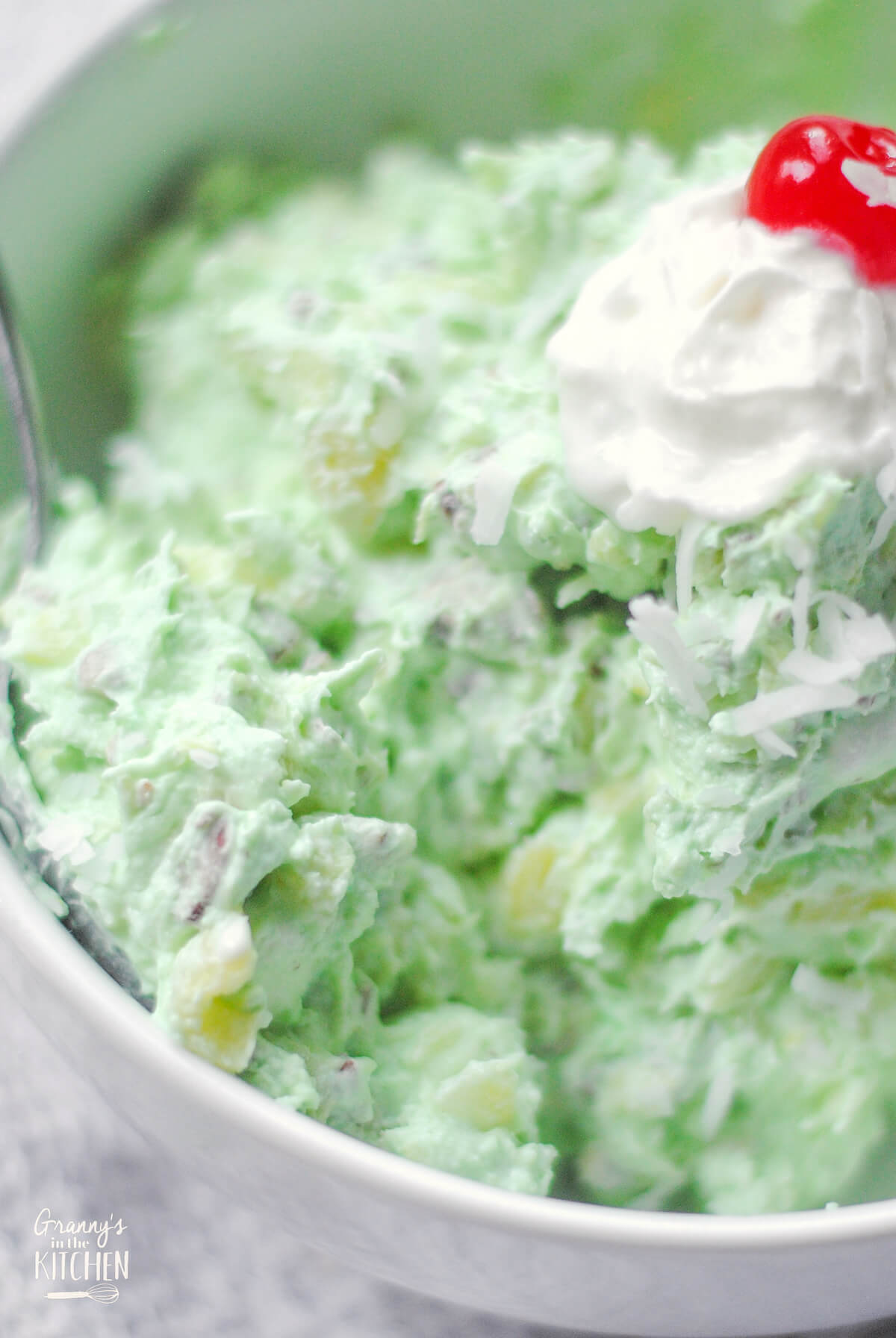 This recipe as written makes about 8 small servings or 4 large servings (if you were to put it in a parfait glass). If you’d like to feed a crowd, this recipe is easy to double! You can also stretch it by using a large container of whipped topping (and keep the other ingredient amounts about the same).

Do You Need Green Food Coloring?

Some recipes for this type of pistachio salad call for green food coloring. I don’t find this necessary, as the dish is pretty bright green already thanks to the pistachio pudding mix.

However, you’re welcome to add a drop or two of food coloring if you want a really, really rich green, or if your brand of pudding mix is paler in color.

Does Pistachio Pudding Mix Have Nuts?

Generally, yes, most instant pistachio pudding mixes contain a small amount of nuts. These can either be chopped pistachios and/or almonds.

If you want to make this recipe nut free, you’ll need to not only omit the chopped pecans, but look for a pudding mix that does not contain nuts.

Combine all ingredients in a large bowl. Make sure that pineapple is drained beforehand to remove the juice. 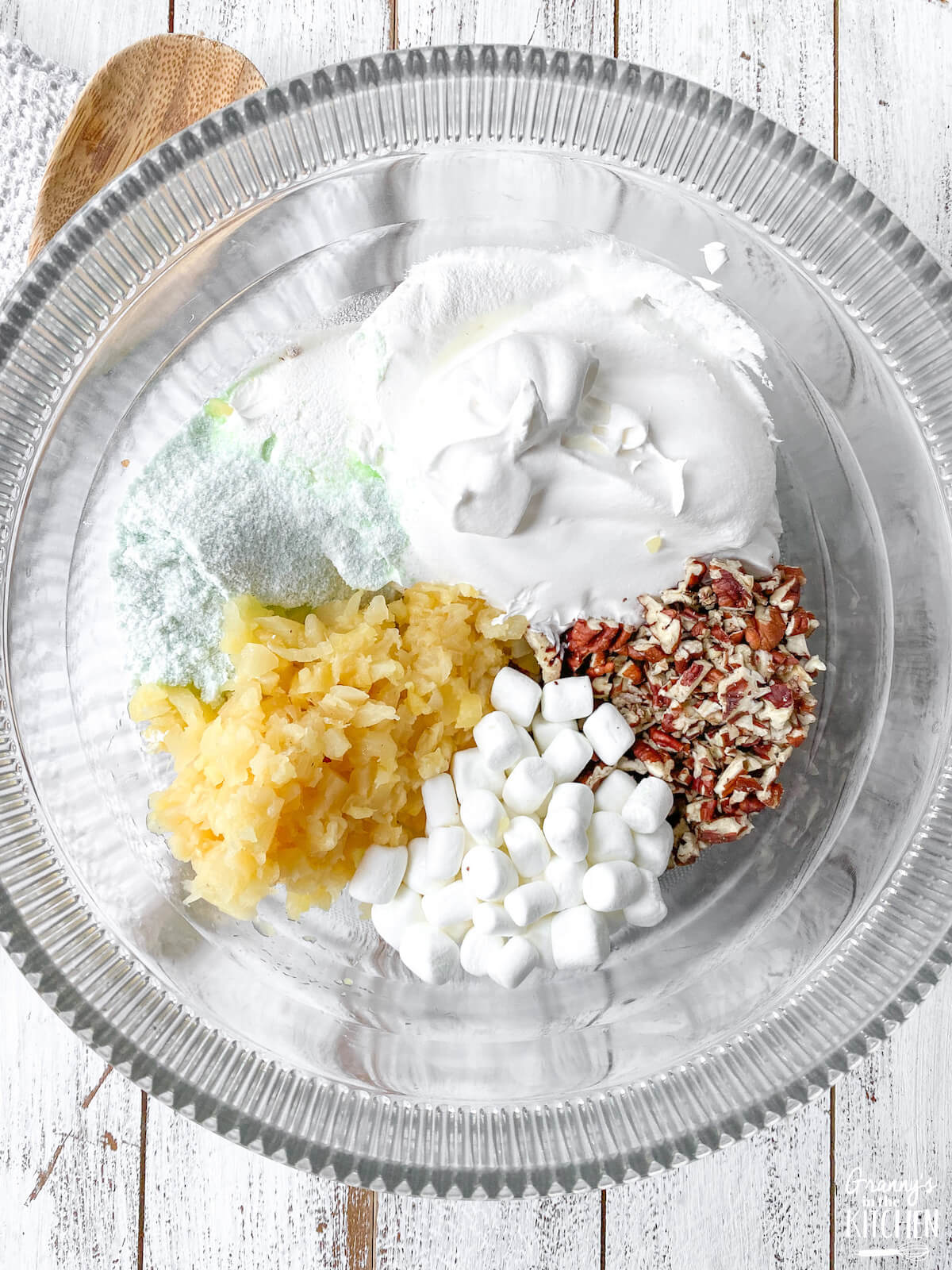 Stir to fold ingredients together so that pudding dissolves completely and the nuts and marshmallows are evenly distributed. 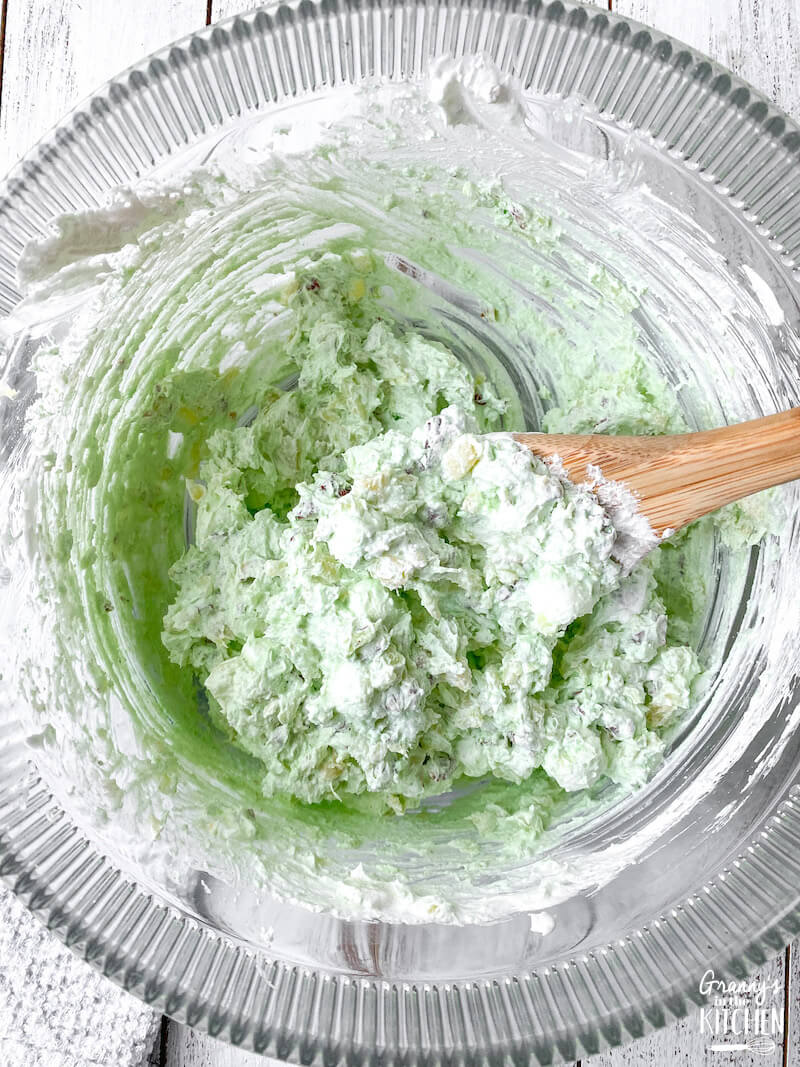 I recommend covering and placing in the fridge to chill for 30 minutes to an hour — I think it gives the flavors a little extra time to meld together. However, you can serve immediately if you like. 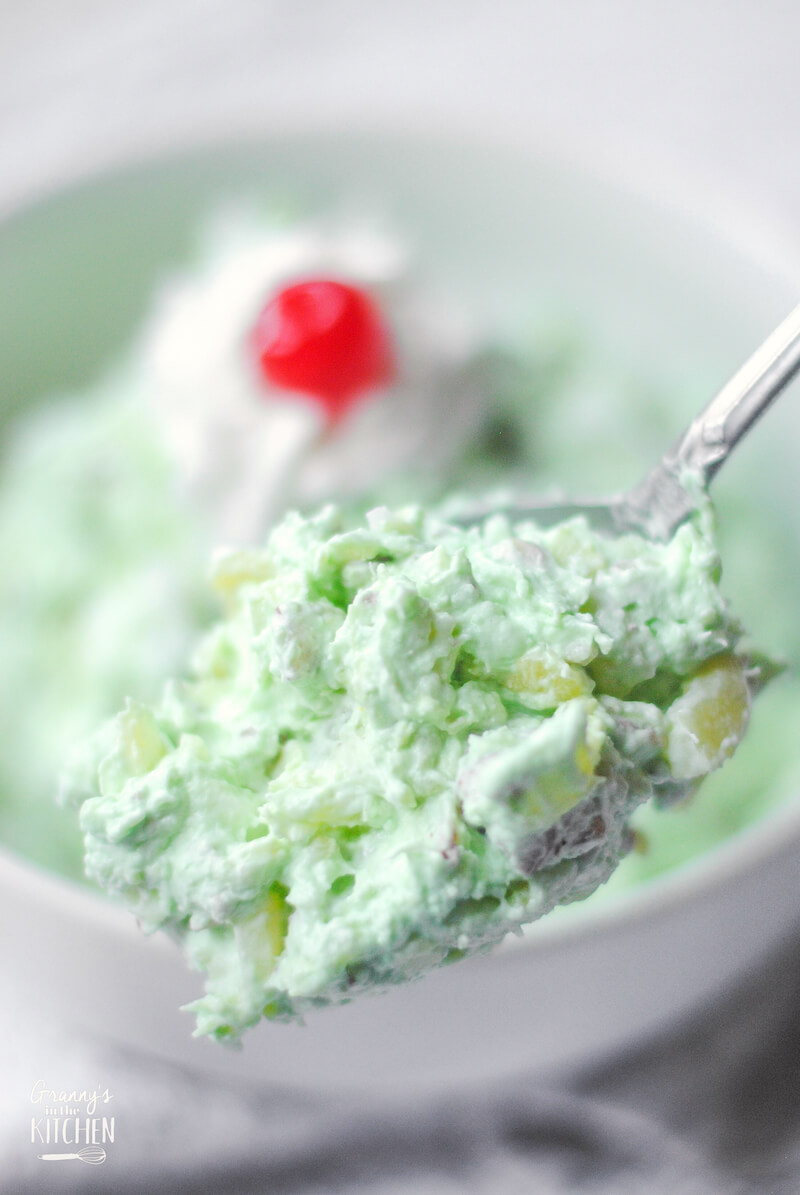 When serving, you can dress up each helping with a sprinkle of shredded coconut, extra chopped pecans, whipped cream…and of course a cherry on top!

How Long Does Pistachio Fluff Stay Good in the Fridge?

It goes without saying that any leftovers should be kept refrigerated. Either transfer the leftovers to an airtight container or tightly cover the serving bowl with plastic wrap. This dessert salad should stay good for 2-3 days. After that, you might notice that the ingredients begin to separate a bit or that it becomes more liquid in consistency. 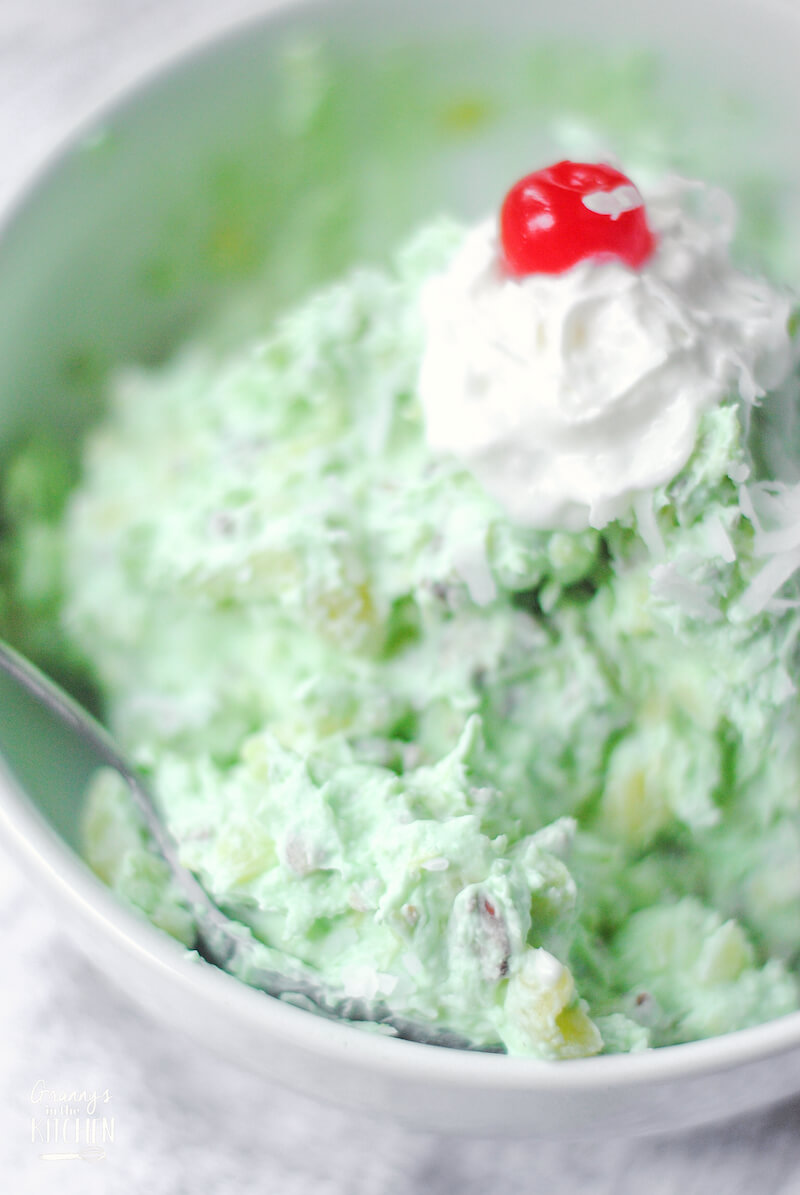 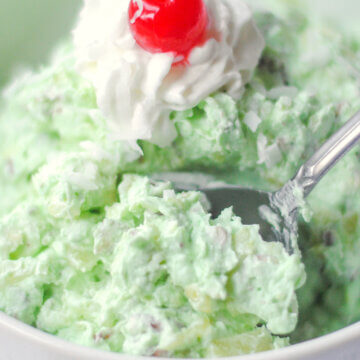 Stacey
Watergate Salad is a creamy and fluffy concoction that has been a staple on holiday tables for generations. Not only is the recipe uniquely delicious, but the mystery behind it is fascinating too!
Print Recipe Pin Recipe
Prep Time 5 mins
Total Time 5 mins
Course Dessert, Salad, Side Dish
Cuisine American
Servings 8
Calories 227 kcal 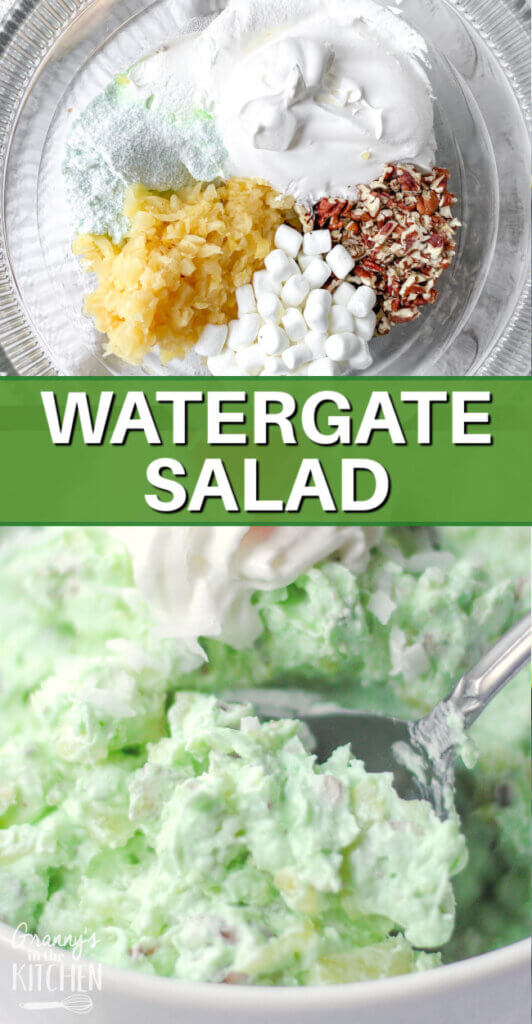 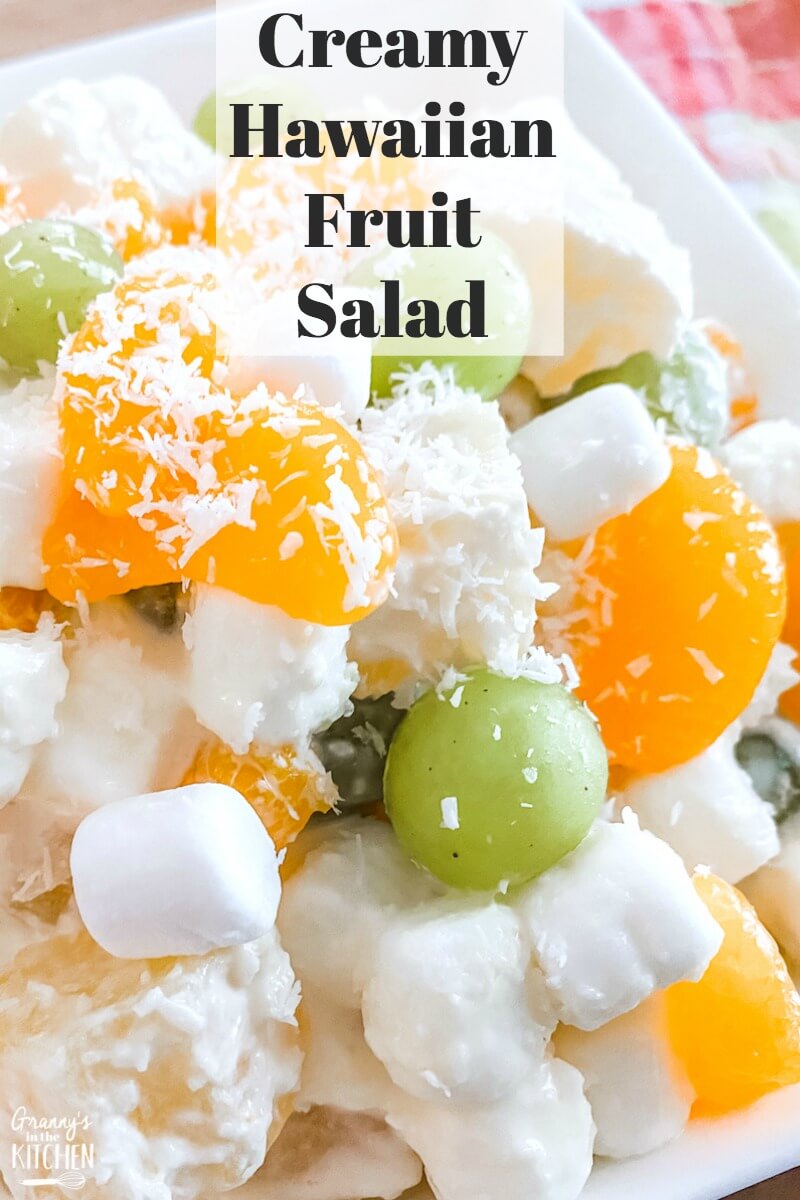 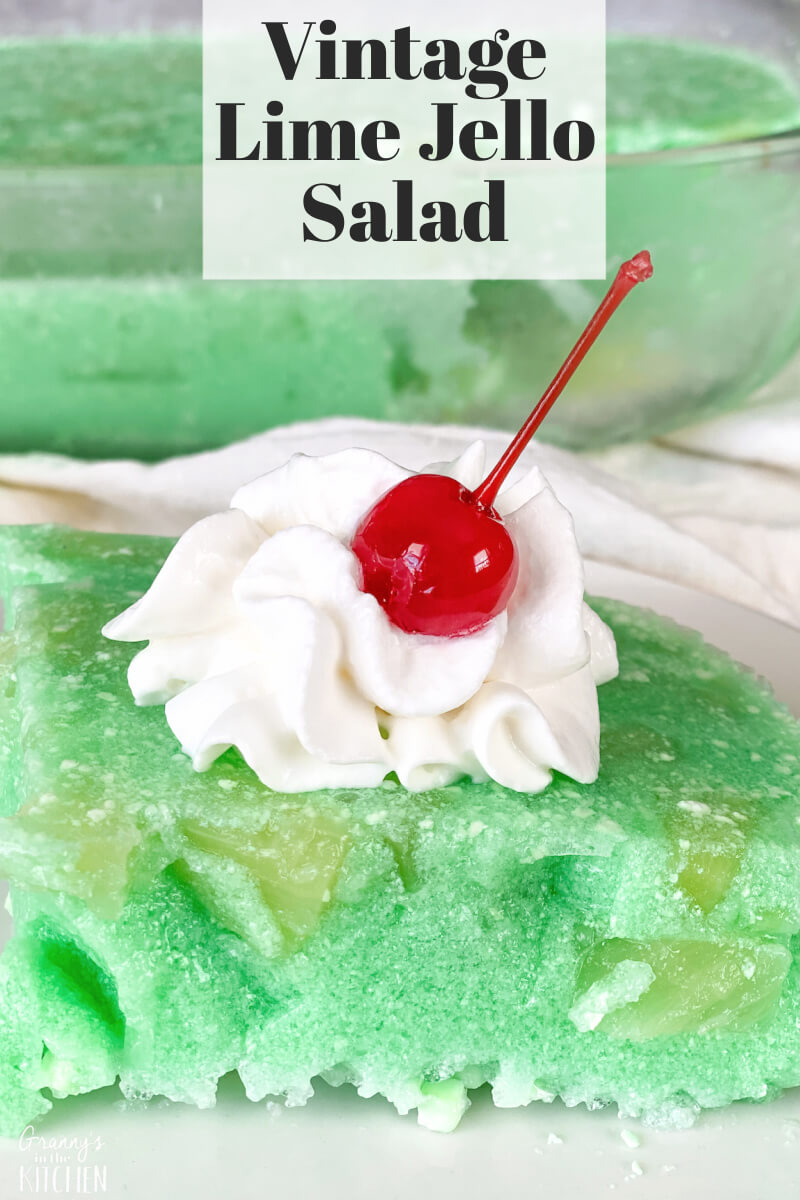